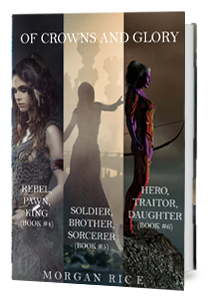 In REBEL, PAWN, KING (Book #4), 17 year old Ceres, a beautiful, poor girl from the Empire city of Delos, wakes to find herself imprisoned. Her army destroyed, her people captured, the rebellion quashed, she has to somehow pick up the pieces after being betrayed. Can her people ever rise again? Thanos sails for the Isle of Prisoners, thinking Ceres is alive, and finds himself in a trap of his own. In his dangerous voyage he remains tormented by the idea of Stephania, alone, with his child, and feels torn over his life’s path. Yet as he struggles to return to Delos, to find both of his loves, he encounters a betrayal so great, his life can never be the same again. Stephania, a woman scorned, does not sit idly back. She turns all the power of her fury on the ones she loves the most—and her treachery, the most dangerous of all, may be what finally brings the kingdom down for good.

In SOLDIER, BROTHER, SORCERER (Book #5), Ceres has won the battle for Delos—and yet a complete victory still awaits her. As the rebellion looks to her as their new leader, Ceres must find a way to topple the Empire’s royalty, and to defend Delos from the pending attack from a greater army than she has ever known. She must try to free Thanos before his execution, and help him clear his name in the murder of his father. Thanos himself is determined to hunt down Lucious across the sea, to avenge his father’s murder, and to kill his brother before he can return with an army to Delos’ shores. It will be a treacherous journey into hostile lands, one, he knows, that will result in his own death. But he is determined to sacrifice for his country. Yet all may not go as planned. Stephania travels to a distant land to find the sorcerer who can, once and for all, put a stop Ceres’ powers. She is determined to enact a treachery that will kill Ceres, and instill herself—and her unborn child—as ruler of the Empire.

In HERO, TRAITOR, DAUGHTER, 17 year old Ceres wakes to find herself powerless. Poisoned by the sorcerer’s vial, held captive by Stephania, Ceres life reaches a low point as she is made cruel sport of—and is unable to do anything to stop it. Thanos, after killing his brother Lucious, embarks for Delos, to save Ceres and to save his homeland. But the Felldust fleet has already set sail, and with the might of the world bearing down on it, it may be too late to save everything he holds dear. An epic battle ensues, one that may determine the fate of Delos forever.

Of CROWNS AND GLORY tells an epic tale of tragic love, vengeance, betrayal, ambition, and destiny. Filled with unforgettable characters and heart-pounding action, it transports us into a world we will never forget, and makes us fall in love with fantasy all over again.

Book #7 in OF CROWNS AND GLORY will be released soon!